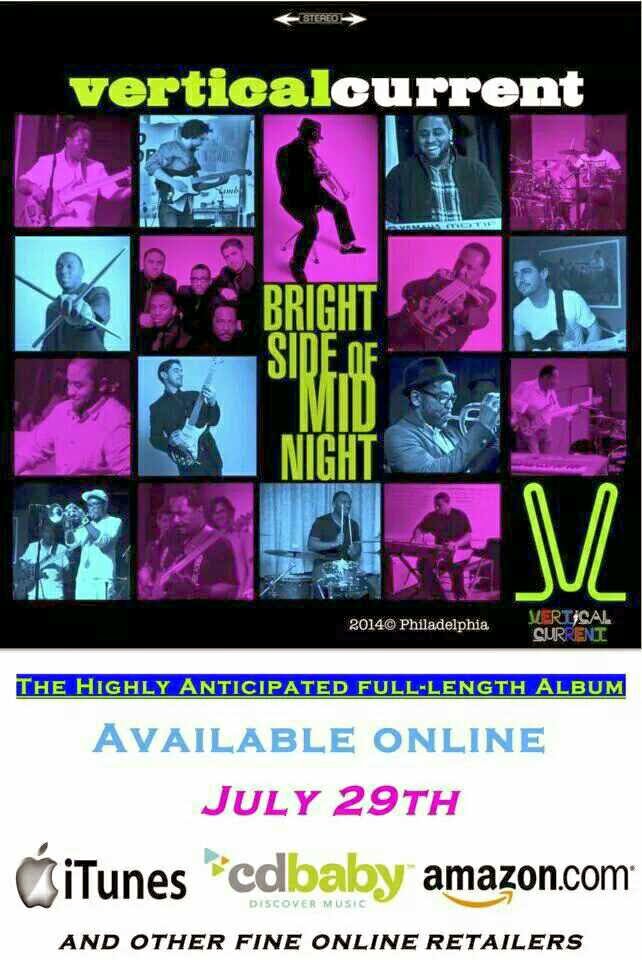 I really love good food and good music! So I love being able to combine the two- especially if I also have great company!

Saturday- August 2nd was no exception!  With the release of their first full-length album, Vertical Current took to the Warmdaddy's stage to celebrate! I was happy to have my girl friend/lil sis there with me!

While the members of this exciting band are able to complement one another's strengths, they also bring on guests that seem to add an extra oomph to their shows! To start the night off, the audience was introduced to the group- Ode to Omni! It was the first time that my friend and I had heard them and we were definitely impressed! Other special guests (who also appear on the album) were Chartel Findlater, Shelia Moser (aka Lee Mo), Rick Tate Jr. and El' Ahmad Barak!

Bright Side of Midnight was released on July 29th and it offers 11 tracks of amazing music! Whether it's taking on classics like Summer Time (feat. Lee Mo) and What the World Needs Now (feat. Chartel) or original pieces like Voice on the Water and Bright Side of Midnight, Vertical Current is sure to keep listeners intrigued!

As usual, I was blown away by VC's performance! At the beginning of their set, I thought they were playing Over the Top [one of my favorite tracks from their 2011 EP entitled, "aRe"] but it turned out to be a medley of several tracks from the project! The way that VC blended their songs together was creative and seamless.

Something that I really enjoy about this group of musicians is the fact that you can feel the passion in their music- whether or not the song they're performing has lyrics!  I definitely believe that music can spark an emotion within you. And VC is successful in conveying a message/feeling of hope and love to (and within) their listeners! Just listen to Get Up! Oh my goodness!

If you don't know of them, you need to!  Click the links below and check out some clips from the album release celebration!


Bright Side of Midnight is available on sites like Google Play, iTunes, CDBaby and Amazon!

Check out VC's website to see when they'll be in a city near you! You won't be disappointed!

**And as far as food, I had the cheese steak rolls with secret sauce! I don't know what that sauce is made out of but I definitely took a container of it back home! Delicious!**

Popular posts from this blog

September 30, 2021
**Disclaimer: I wrote this letter to myself but I hope that as you read it, you’re encouraged and inspired to reflect on your own life… Give yourself credit for the progress you’ve made (or give yourself permission to dream again). See how far you’ve come & be grateful for all that God has done for you!🙏🏾💛 Dear Kara, I know I don’t say it enough. . . Please know that I truly am proud of you! You’ve made *obeying God* your life’s goal & you are experiencing the manifestation of His faithfulness. Almost 3 years ago, you moved to Texas with only a large suitcase, a duffel bag, and a backpack! You didn’t have a job or place to live but you came and made the best out of your circumstances… You literally moved by faith! God opened doors, made ways, and continues to show Himself strong, in your life! You have certainly faced hard times & disappointments but you are still here! Just in the last year, situations arose and made you question your value. However, you were reminded
6 comments
Read more

August 09, 2020
I was surprised and confused.  I was sitting in church (last August) when the announcement was made that my father would be preaching for the upcoming Friday night's service. I got home, called my parents, and they laughed as they confirmed what I'd heard. Almost a year after leaving Maryland, I was finally going to be able to see my brother and father- in person! I was definitely looking forward to it! At the time, I was still working at a pizza restaurant and thankfully, the only day  I'd actually requested off was the exact day that they would be free to hang out. (I was basically working- every single day.😓) I proceeded to get on my family's nerves. I was trying to figure out what time Dad & Phillip would arrive in Texas, what airline they were traveling with, the airport they were flying into. . . everything! Nobody was giving me the details😔 but I did get a text when they got settled in their hotel room. On Thursday, we met up for dinner. They picked me up
Post a Comment
Read more

May 18, 2014
Meeting him was like a breath of fresh air. I hadn't dealt with many guys like him. Most of the time, dudes act like all we (females) wanna hear is, "Hey ma. . . (hey sexy, or what up shorty)" but he simply said, "Hello." He was warm and hilarious- willing to embarrass himself in the grocery store just so he could keep talking to me. Before we went our separate ways, he'd asked me out. Talking to him was easy! If there's one thing that girls love, it's being able to have a great conversation with a guy. He amazed me with his knowledge of statistics and a desire to analyze almost everything. He was easygoing and fun to be around. He really wanted to know about ME- who I was, what I'd studied in college and what interested me. . . And he didn't mind giving out compliments ;-). Our meal together was bittersweet.  Like I said, talking to him was easy. Hours passed during our conversations on the phone and in person. We kept each other l
2 comments
Read more